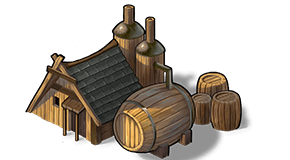 It can only be built by Teutons in the capital but affects the whole empire.

The effects are applied at the time of battle and not when the troops are sent.