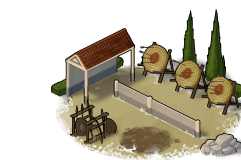 Troop speed can be increased in a number of ways,  through the use of different hero items, such as boots, pennants or standards, with the faster troops artefact and through the tournament square.

The troops can benefit from multiple bonuses at the same time, here's how they are multiplied:

So the total speed in this example will be: