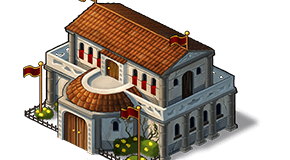 The loyalty effect affects all battles that happen during the celebration. The moment of battle counts, not when the troops were ordered to attack.

There are limits of CPs that can be gained from a celebration, depending on gameworld's speed and celebration size.

After each celebration, there is a cooldown time. This is smaller with each level of Town Hall, and depends on gameworld's speed.

In case of villages in the grey area, which do not produce CPs at all, their theoretical production still counts toward the amounts produced by the celebrations.

Even if the Town Hall was destroyed, the ongoing celebrations continue and still provide their effects. Queued celebrations will also continue and start once the cooldown ends but no new parties can be purchased or queued until the building has been rebuilt.