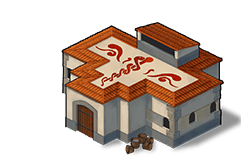 The Hospital allows treating wounded troops so they can again become part of the army.

This allows quicker rebuilding of losses after major battles. It’s not cheaper to heal; the costs are the same as training new units; however, the healing time of wounded troops is half that of training a new unit.

Wounded troops that are not in the process of healing, die continuously over time, at a rate of 10% per day. As soon as you add any unit to the healing queue, it cannot die anymore.

The Asclepeion is a special building of Spartans, which replaces Hospital in their villages. It provides the same features as hospital, with one important change. Instead of recovering 40% losses from battles, it recovers 60% of them. Asclepeion is also easier to build, as it's cheaper and has lower requirements. It also provides a little more Culture Points than hospital.