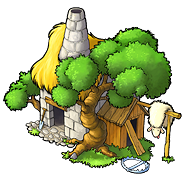 The Trapper is a Gaul Special building and can be made in any Gaul village. It protects your village with well-hidden traps. Enemies can be imprisoned and won't be able to harm your village anymore.

Troops imprisoned in traps eat crop from the village they originally belong to. One trapper can give you a maximum of 400 traps.

After upgrading one trapper to level 20, additional trappers can be built.