What is an alliance

A confederation is a strong bond between two or more alliances. In this case, alliances help each other and cooperate between themselves more. Usually, they help each other by sending reinforcements or resources if needed. Also, they can manage massive attacks together, share wars and fight their common enemy. The confederacy system further increases the cooperation between alliances and restricts resource and reinforcement sharing to the confederation members only.

It is only possible to have a confederacy comprising up to four alliances, which have to be connected with each other. Non-aggression pacts are not affected by these confederacy regulations.

How to create a confederacy

Let's say alliances fw2 and TG created a confederacy as usual. When this was done, the relationship is visible in the alliance diplomacy. 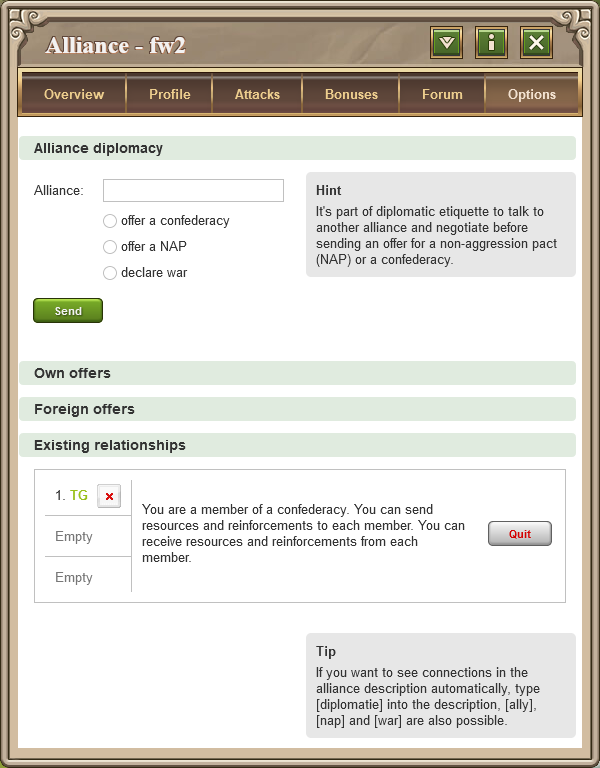 An alliance might leave the confederacy at any time. It can also be kicked, if all other members agree on this.

You can only send resources and troop reinforcements to your own villages, alliance or confederacy.

Offers in the marketplace are still available for everybody. You may check the "own alliance only" option to make an offer available for alliance members only.

When the connection that allowed sending resources or reinforcements is broken, for example a player leaves an alliance or an alliance leaves a confederacy:

When the timer finishes, the game checks which alliance and cofederacy the players belong to and any reinforcements that are from players not currently in the same alliance/confederacy, are sent back automatically. It doesn't matter how long ago they reached that village.

Reinforcements still on the way when timer was finished, will be send back automatically when they reach their target.

If the player joins and leaves the alliance again after the timer has reset, a new 1 hour timer starts.

A new timer is started for every single change.

Note that on gameworlds started before May 2022, the timer duration was 12 hours, instead of 1 hour used on newer gameworlds.

A non-aggression pact (NAP for short) is used when two alliances do not want to attack each other, but they do not want to help each other either. It's commonly used between strong alliances which would damage each other badly and they want to avoid such an event. These are limited to 3 per alliance.

War is a heavy struggle between two alliances. Alliances on the confederation list are usually standing behind alliances in wars.