If you think that another player is breaking the game rules you can report it. Depending on the type of violation, the report will be handled either by Rule Enforcement Team (RET) or your local Customer Service Representatives (CSR) and their team. CSR-teams handles language-related violations (for example insults in Ingame messages), and RET handles all other violations.

There are a couple of different ways to send a report. Which you choose depends on what kind of violation you want to report.

If your report is related to something the other player wrote to you, report that message. This includes cases where the player wrote something that suggests he violates the rules, for example, has multiaccounts.

If you want to submit a more general report based on the player's behaviour in game, use the option to report the player.

Report a Message Report a Player What Happens Next?

If you want to report an Ingame Message (IGM), the easiest way is to do that from the message itself.

In the message header you find a button:

Click on the button, and choose correct reason for the report:

Be careful to choose the correct reason, there will be different actions taken and the report can be sent to different departments depending on the reason you give.

Advertising
Choose this reason if the message contains advertisements or spam.
Insult
Select this reason if you were insulted or harassed in the message.
Gold buying
This is a separate category for spamming messages offering buying gold outside of the game.
Other
Select this if the reason doesn’t fit in any of the previous categories. For example, if the player admits in the message that they violated the rules.

Once you have clicked the "Report" button, the report is sent and will be handled.

Make sure to report all messages related to the specific violation, especially if they have different information, as our team will only see and check the reported messages.

If you want to report a player that you think is violating game rules, the easiest and quickest way is to do that from the player's profile.

In the Details section of the player's profile, you find a button for reporting the player (like in the ingame message). 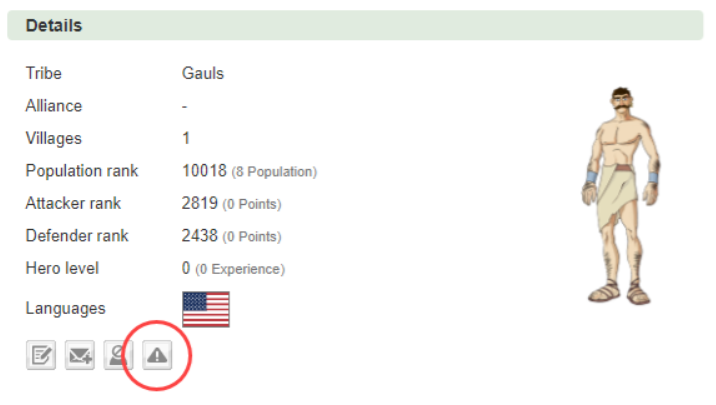 Click on the button and you can choose the reason why you are reporting this player. 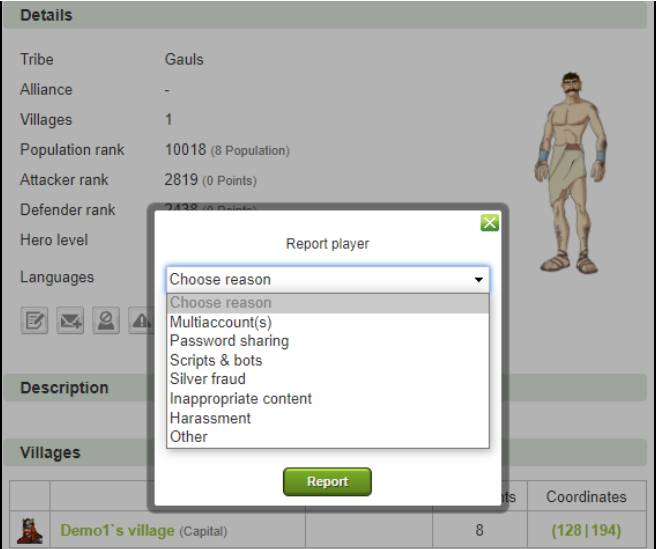 Be careful to choose the correct reason, there will be different actions taken and the report can be sent to different departments depending on the reason you give.

Multiaccount(s)
You think that the player has multiple accounts on this gameworld.
Include a list of the accounts you suspect the player owns.
Password sharing
You think that the player has shared his password with another player or used another player's password.
Explain in the comment details and who is the other involved player or players, if you know that.
Scripts & Bots
You believe that this account is played by a bot, or the player is using scripts or other software to play the game, not just a regular browser.
Silver fraud
You think this account is involved in a process of selling or buying silver/gold outside of the game.
Inappropriate content
Some content in the player’s profile, or other places such as the nickname or village names, is offensive or violates other rules.
Harassment
You feel harassed by the player. If this is done through in-game messages, please report the specific messages instead.
Note that as Travian: Legends is a wargame, attacking someone, even constantly, is not a violation of the game rules.
Other
Anything that doesn’t fit any of the previous categories.
Make sure to explain clearly why you are reporting the player..
For example, if you suspect someone of having private farms..

You can also add more information in the comment, like why you believe this player is breaking the rules or other information that may be useful. The more information you can provide, the better the investigation of the case will be.

When you click the Report button it will be sent and handled. You can send 2 reports like this per day.

All reports are carefully investigated by either RET or CSR, depending on the type of violation in the report. Any necessary action will be taken.

The fact that you believe there is a violation of the game rules doesn't necessarily mean there is anything illegal going on. Just like in a court of law, there has to be sufficient evidence before a ban and/or punishment is issued. RET doesn't ban on rumours and speculations, or on second-hand information. Your information could be the missing part or give the right angle of the investigation, so your reports are of great value for RET and the support teams.

If you reported a player, you will get an in-game message when the report has been handled and closed.

Why don't I get information about the result of my report?

Why can't I see that an account has been punished?

Sometimes you can notice that an account is banned, or that the population decreased. Not all bans and punishments are visible to other players. Some punishments are instantly executed, others can be a warning, blocking from sending messages, resources taken, etc.